All About That Bass Video Featuring Haley Reinhart Goes Viral

If you’ve been on Facebook lately, there’s a good chance you’ve come across some familiar faces on your timeline. Postmodern Jukebox’s recent new cover of “All About That Bass” was uploaded to the website, and has now gone viral. 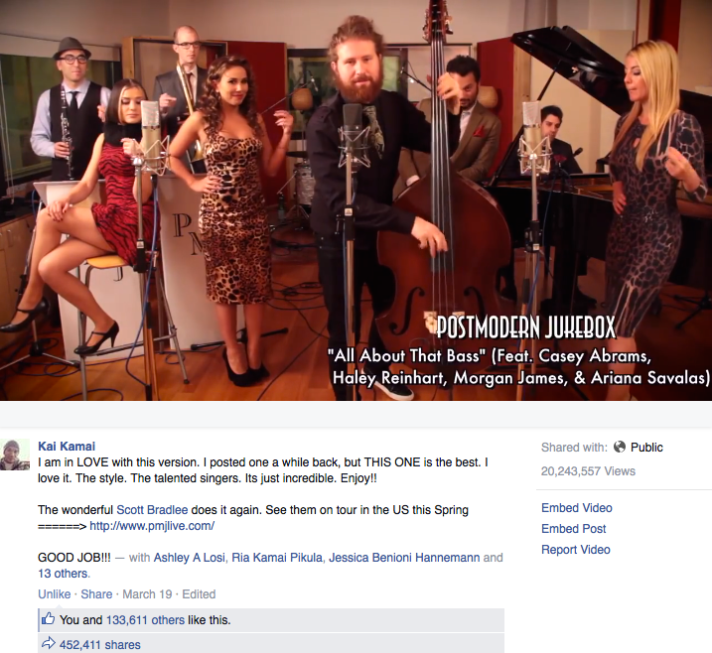 On top of the recent success of this video, they officially have the approval from the original singer/songwriter Meghan Trainor herself! She tweeted this today:

This version of the song is currently sitting at #1 on the iTunes Jazz charts. Own it for a buck 29 here!

I couldn’t be happier to see a video involving Haley blow up, it’s helping her get some of the recognition she deserves.

Here are some notable comments found on the Facebook video:

“Casey Abrams and Haley Reinhart…Just goes to show, the great ones are not always (usually) AI winners.”

“Love their style! I knew we would see more of them after they were on TV. They have such incredible talent.”

“Gotta share this. Outstanding. The First Singer is Haley Reinhart. Possibly the next Christina Aguilera. Incredible voice and jazz talent.”

“I’m so in love with that girls voice at the beginning. I could listen to her sing all day with my eyes closed.”

“Wow. Haley Reinhart hasn’t lost a beat since American Idol. She was the best singer then and still is.”